Walking up Stone Mountain, it’s hard not to notice people.

They’re mostly hiking, but humans have quarried the mountain, carved into it and completely changed the landscape over the past few centuries.

But there are two other large mountains in the Metro Atlanta area, and they offer a glimpse at what Stone Mountain might have looked like without the same heavy human impact.

The top of Stone Mountain is a huge, bare rockface. It’s a plateau of ancient, gray stone.

There aren’t many plants other than some little red succulents with tiny white flowers growing in cracks between the slabs of granite and quartz. Occasionally, there’s a swirl of black minerals in the rock that hikers walk across. 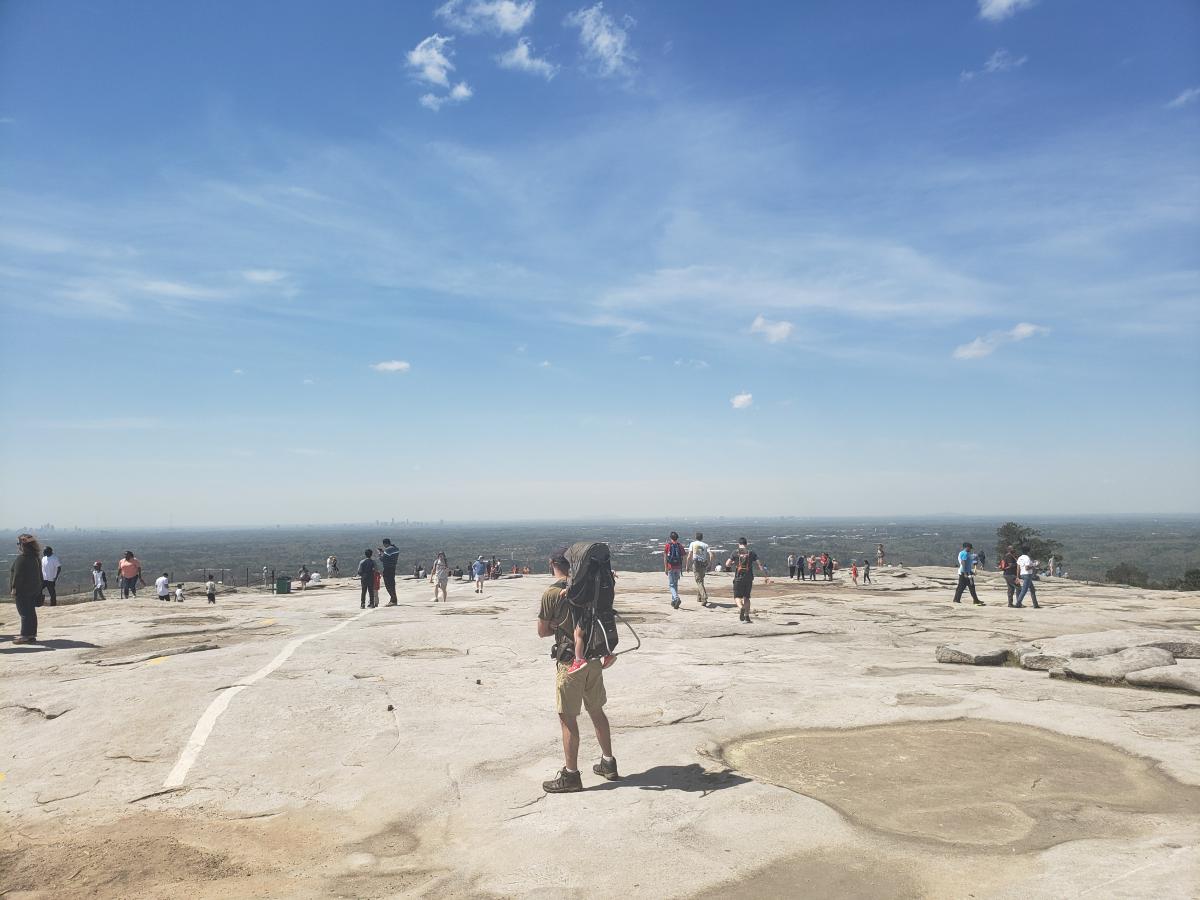 But across the horizon, the city of Atlanta is just in the distance. Stone Mountain is only 30 minutes east of the city, and on a recent spring Saturday, it was busy.

“Most mountains are created by volcanic activity or seismic plates pushing together,” she said.

“A monadnock is like a hard lump of earth that the softer earth has worn away, so it’s more exposed from erosion less than something violent like a volcano or an earthquake.”

Cardenas is the executive director for the Arabia Mountain Heritage Area Alliance. She said Stone Mountain isn’t a completely unique geological phenomenon in the area surrounding the city.

“Here on the east side of Atlanta, we have the most common monadnock, the one that everyone knows, Stone Mountain, world famous, and then further south we have Arabia Mountain and Panola Mountain,” she said.

Cardenas said those three big Monadnocks: Stone, Arabia, and Panola formed independently of each other hundreds of millions of years ago, but, taken together, tell a story about people’s impact on nature. 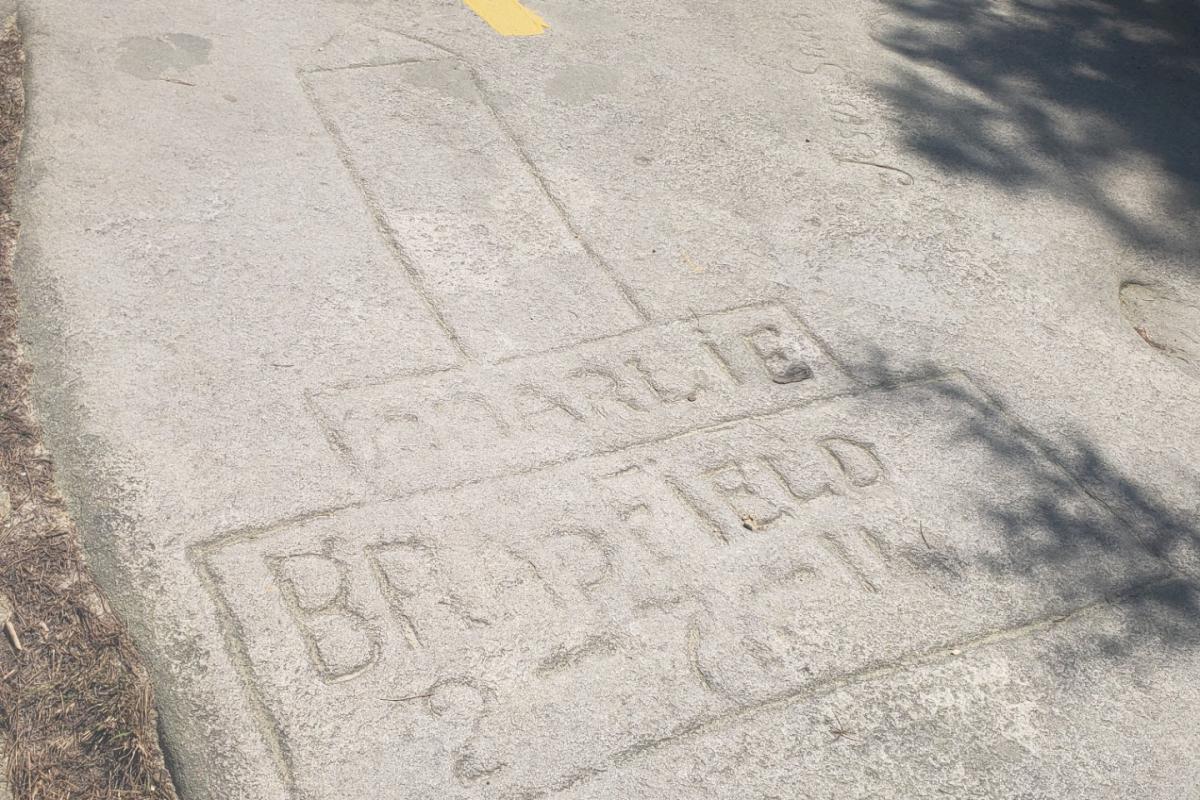 This carving from the early 20th century is among the hundreds that dot the trail up Stone Mountain.
CREDIT SOPHIA SALIBY/ GPB

“Through thousands of people walking up a rock every single day to a more natural area to a complete conservation area, we can really see the impact that we as people have over time on a landscape,” she said.

Cardenas said most of Stone Mountain bears evidence of people on the mountain from the well-trodden rock to 20th Century graffiti carved into the footpaths. However, there are still some native plants that do grow.

“As you hike up Stone Mountain, notice that the stone is really smooth and worn. You see bare rock. You don’t see a lot of plants, but if you look in the crevices you start to see a plant called diamorpha.”

Diamorpha are those little red plants. They grow in depressions of the stone called solution pits, which were worn away by the greyish-green lichen that covers the stone. 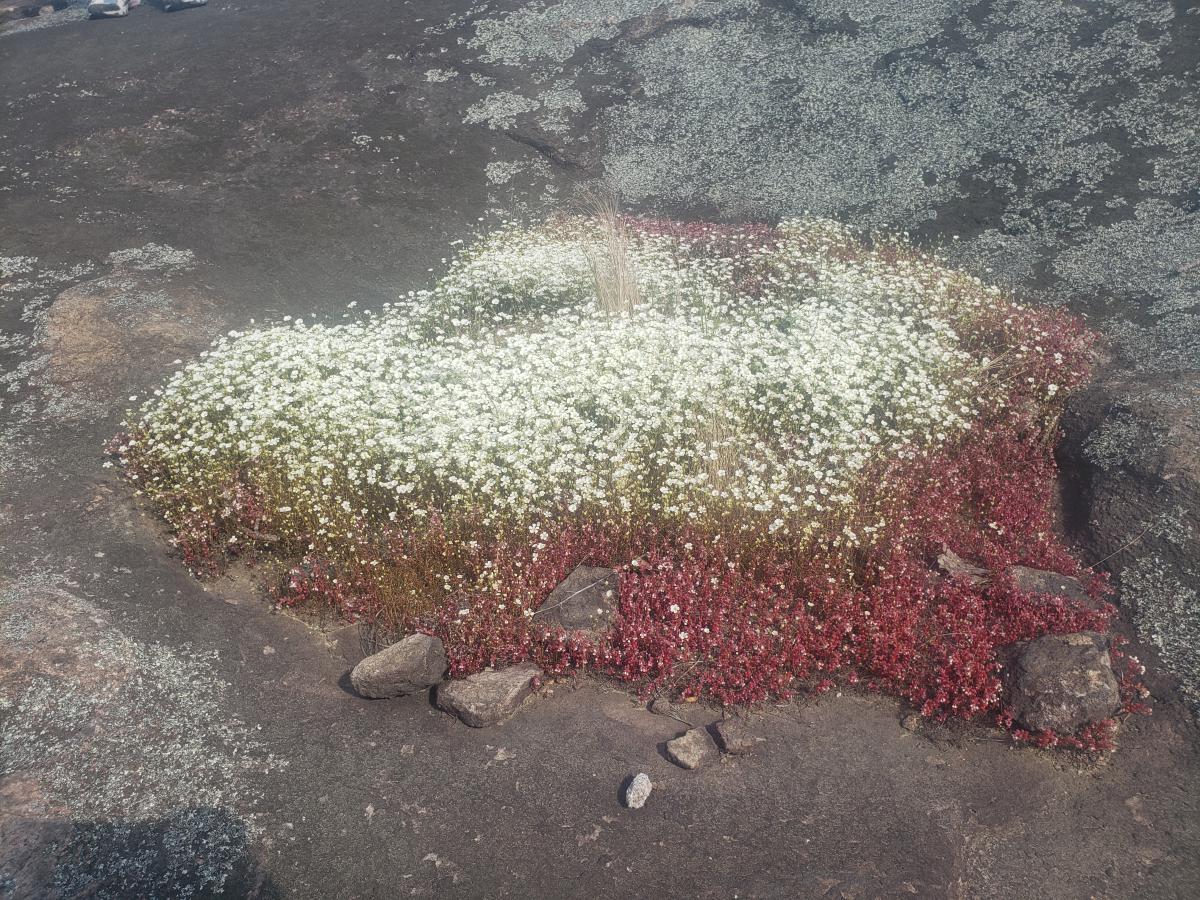 Solution pits come to life in early spring with diamorpha that stay dormant most of the year.
CREDIT SOPHIA SALIBY/ GPB

They’re mini-ecosystems that take tens of thousands of years to grow.

The solution pits are much more common on one of the other monadnocks, Panola Mountain.

“On Panola Mountain, you have to walk single file to reduce our human impact on that landscape,” Cardenas said.

Assistant Manager at Panola Mountain State Park, Taylor Aluko, explained that the limited activity on the monadnock has created a completely different ecosystem at the top.

The forest on top of Panola started as a tiny of pool of lichen and water 50,000 years ago. That’s why hikers can only visit the mountain on guided tours, to protect those tiny ecosystems.

There’s only one place on Panola Mountain where people tried to quarry. It’s a section of rock broken at straight angles that could only be manmade. Panola Mountain ranger, Erica Betross said the stone on Panola was too fragile making it unusable. 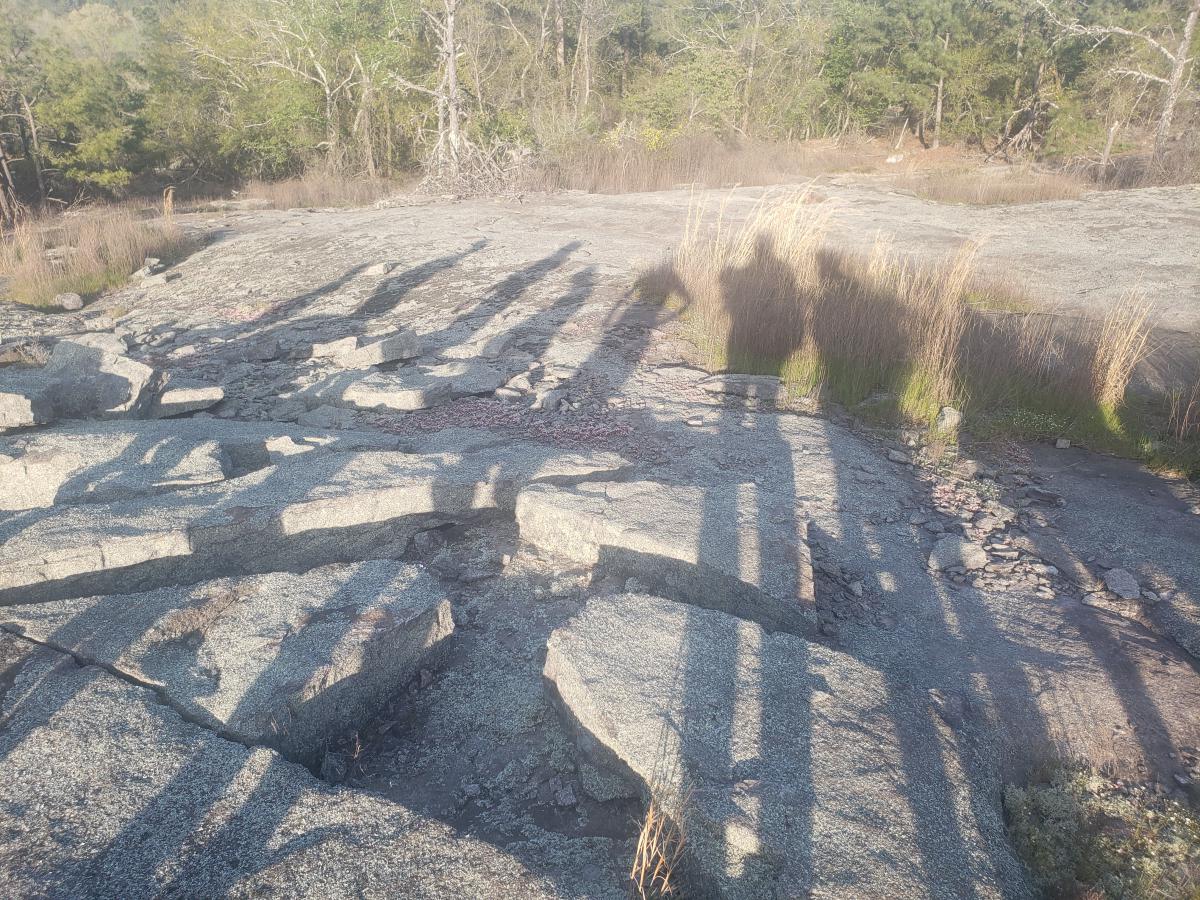 “Because of that, this is the only extent of human damage that we have on our park, so we’re very, very fortunate for that,” she said.

Back at Stone Mountain, Barcia Chasteen of the Stone Mountain Memorial Association said this same ecology exists on Stone Mountain too, but it’s harder to find when thousands of feet march across the rock every weekend.

“But because Panola is here and is protected, it makes me feel better about Stone Mountain being like this.”

With high visitation during COVID-19, parking has become an issue at the base of Arabia Mountain on weekends. Please consider visiting on a weekday or using our recommended parking sites.

You have Successfully Subscribed!