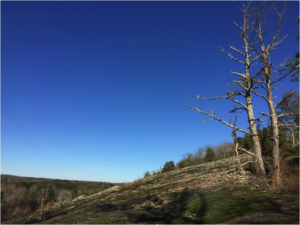 Every season in the Arabia Mountain National Heritage Area offers its own wonder and winter is no exception. The bare monadnocks feel all the more otherworldly in the colder months, when many of the trees have lost their leaves, and the spring plants have died to be replaced by winter flora. And that’s not to mention the cooler weather. This winter is the perfect time to get out on the trails.

Here are a few good hiking ideas to get you out on the rocks this January:

Arabia Mountain: Starting at the Davidson-Arabia Mountain Nature Center (located at 3787 Klondike Road), take the Mile Rock Trail to loop across the monadnock and through the surrounding woods. Located in the western part of the nature preserve, slightly separated from the Arabia Mountain peak, the Mile Rock Trail takes you through the remains of the quarry. Follow cairns across a rock face filled with both quarry remnants and green patches where vernal pools and soil support life. The trail connects to the Forest Trail at Arabia Lake.

For a map of the Mile Rock Trail and to see other Davidson-Arabia Mountain Nature Preserve trails, take a look at the map here.

Panola Mountain: The only of the three major metro-Atlanta monadnocks that was never quarried, Panola Mountain offers a glimpse into a prehistoric Georgia. The best way to see Panola is through guided hikes with State Park rangers and volunteers, as much of the park is carefully protected to maintain its rich natural state. 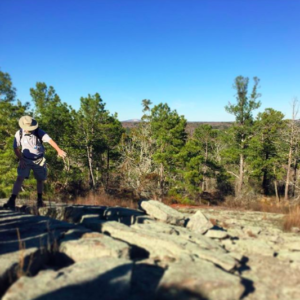 If you’re looking for a different hike than the ones we’ve listed above, take a look at the Arabia Mountain PATH, a system of paved trails that runs throughout the National Heritage Area, or hike through Vaughters’ Farm, one of the last dairy farm landscapes in DeKalb County.

As you’re hiking, be on the lookout for wildlife. There has been “a lot of bird activity” lately, said Davidson-Arabia Nature Preserve Ranger Evonne Blythers-Lapsey. Migratory birds frequently fly through the area, including Sandhill Cranes (see what they look like flying overhead and learn more about these birds). You can begin to see the cranes flying overhead in January, with more cranes flying northward by February and early March. Common bird species such as cardinals and blue jays, as well as wild turkeys, black vultures, and turkey vultures are found throughout the National Heritage Area. Check out this link from Fernbank Science Center for more information on what birds you can find. Vaughters’ Farm contains one of the few places in metro Atlanta you can see the eastern meadowlark, a bird emblematic of grasslands. Walk through the meadow loop trail to hear their melodious calls beginning around March.

Also be on the lookout for white-tailed deer, the Georgia state mammal, and the tadpoles and salamander efts that are growing in the vernal pools.

Plants tend to be less active and less colorful in winter, but Diamorpha smallii (also called just “Diamorpha,” or by its common name, elf orpine) is an exception. This small plant thrives in the shallow soils on top of the monadnocks, covering the rock face with a vibrant red. While it really takes off growing in the spring, “We can see evidence of Diamorpha as early as December,” says Panola Mountain State Park Interpretive Ranger Erica Bettross. Be careful where you’re stepping as you hike so we can preserve these native plants.

Winter in the National Heritage Area is just as full of life as the rest of the year – so come on out and see a landscape filled with wildlife and otherworldly beauty.