Granite is the natural feature that makes the Heritage Area significant. The monadnocks of Arabia and Panola formed millions of years ago and despite human activities, remain as sentries to history. The unique qualities of Lithonia granite, officially called Tidal Grey, is found at Arabia Mountain and at smaller, still-active quarries. It was desired for its distinctive swirl pattern and high structural density which made the stone attractive as a building material. The granite at Panola Mountain does not have the same structural composition and was not heavily quarried.

The proximity to the rail road meant that the Tidal Grey could be easily transported across the country. In 1949, the Lithonia district produced nearly 1.5 million tons of granite valued at the time at $3 million. It is believed that Lithonia granite is present in dozens of prominent buildings around the country including buildings at the West Point and Annapolis military academies, Congressional offices in Washington, DC and state capitols.  The distinctive granite is present throughout the Heritage Area in nearly all historic public buildings, community institutions and many historic homes. Lithonia granite was also a popular material for road pavers and curb stone, called Belgian block.

Two technological advances in quarrying and using granite were important in the Heritage Area. Prior to 1880, the stone was hand quarried but starting in 1879, workers used drills, dynamite and air compressors to “raise a ledge” or sever a large block of stone from the mass. That allowed more control over the size of the stone and large stones could be used for dimensional or building construction.

The second advance was the discovery that adding granite grit to chicken feed helped with the birds’ digestion. The Davidson family, which owned several quarries in the area, became the largest supplier of chicken grit in the world. They claimed that the sparkling particles of mica in the Stonemo grit attracted the eye and helped the chicken’s gizzard break down food.  The company was so successful in distributing their feed additive, a TIME Magazine article from 1941 reported the U.S. government allowed them to continue to operate during WWII in the name of national defense. 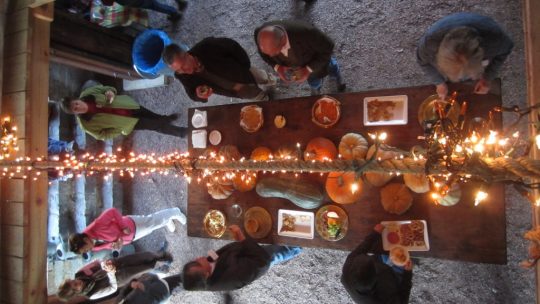 Granite is the natural feature that makes the Heritage Area significant.