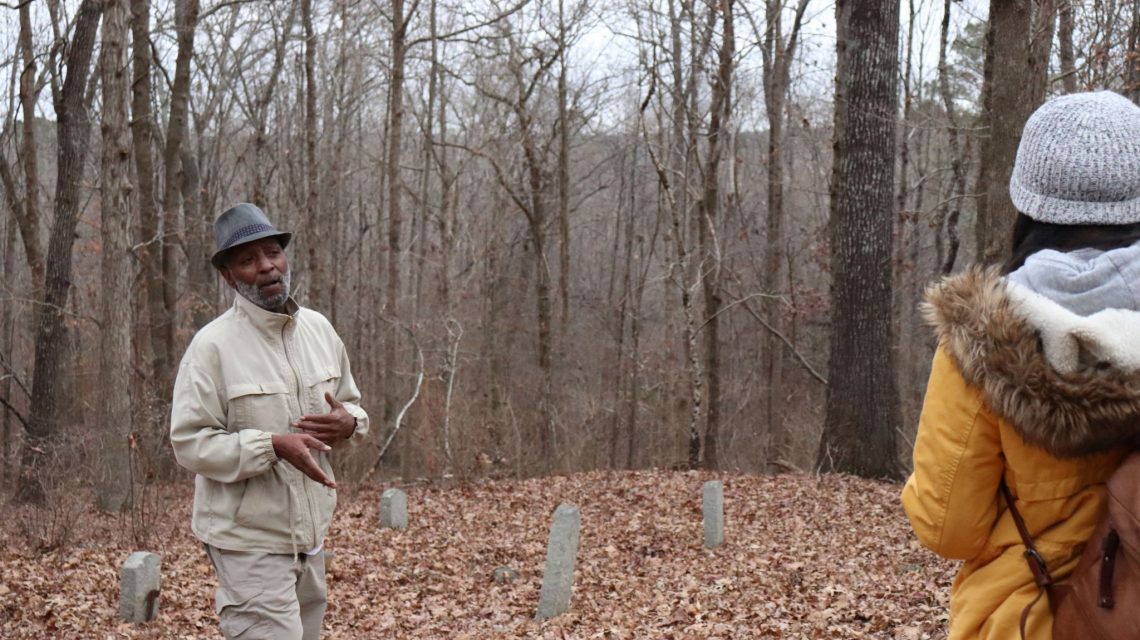 By Shelia Poole – The Atlanta Journal-Constitution 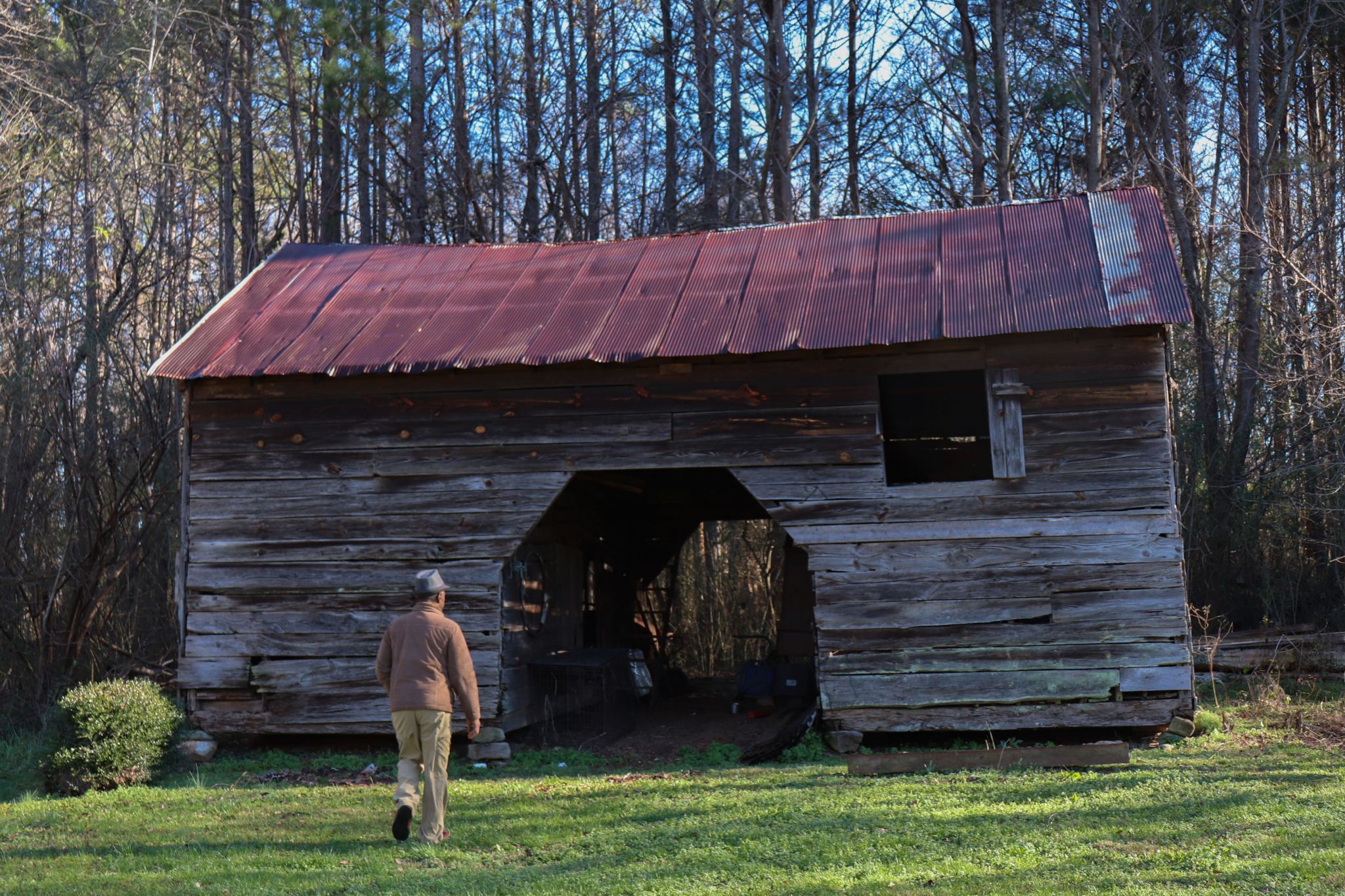 Johnny Waits sits in a chilly room in the old Bryant family home on Crossvale Road in Lithonia with a space heater in one corner to provide extra warmth.

He has turned what used to be a bedroom in the nearly century-old white-frame house into the Flat Rock Archives. Among items preserved here are family photographs, church records, small-farm equipment, personal objects such as hairbrushes and jewelry, and records from the old one-room Flat Rock School that mysteriously burned down in the 1930s.

It’s where Waits, 57, who has a degree in architectural engineering, spends most of his days and energy trying to keep the history of Flat Rock alive. As president of the archives, he’s on a mission to make sure the story of perhaps one of the oldest continuously occupied African-American communities in DeKalb County doesn’t fade from memory.

Established in the late 1800s, Flat Rock was home to former slaves, sharecroppers, farmers and workers from the local rock quarry. In its heyday, about 300people lived there, estimates Waits. But during the Depression, Southern blacks fled places like Flat Rock for Cincinnati, Chicago and Detroit in search of jobs, education and to escape the deep-seated racism of the South.

But T. A. Bryant, a farmer and long-time resident of Flat Rock, didn’t want to see the community disappear.

Piece by piece, he started buying up the land and later sold smaller parcels to family members and other African Americans to encourage them to stay in the area.

“He wanted people to stay there and not go up North,” said his son, the Rev. T. A. Bryant Jr. “He didn’t want church members to move out of the community because the church would get weak and eventually close. And he was a staunch Mason, through and through. That was his reason for doing that. He wanted to keep people in the community to support those institutions.”

It is Bryant’s home in which the archives reside. Nestled between subdivisions near Flat Rock Elementary School on Evans Mill Road, it is located on a rare pocket of rural landscape, complete with dilapidated barn, smokehouse, outhouse and greenhouse.

“Knowing that slaves worked the very land we now own is so important to everyone,” said Waits, who still lives in Flat Rock, as does his mother and sisters. “The more we know our history, the more we understand ourselves. I mean, we’re still here. A lot of people left the South. We’re still here and we’re surviving.”

Waits estimates 250 people live in Flat Rock today, about 30 percent of whom are descendants from original families such as the Waits, the Hendersons, the Bryants, the Wises, the Kellys, the Shoemakers and the Lyons.

Just a short drive from the house and a walk up a woody incline is a slave cemetery. The area is covered with brown leaves, fallen tree limbs and undergrowth. Waits frowns when he sees a cache of discarded tires. Sadly, the area is a popular dumping ground.

Several years ago, Jeffrey Glover, associate professor of anthropology at Georgia State University, enlisted students to document the 200 or so graves in the historic cemetery, which backs up to one of southeast DeKalb County’s most affluent African-American subdivisions. The goal, which he hopes will be completed this summer, is to have a computer-based program that will allow users to click on a grave and get information about the person buried there.

Glover said some of the graves date back to the 1830s, although it’s difficult to to be exact, since the older graves don’t carry dates. Some have headstones. Some simply have large rocks to mark the burial spots, its inhabitants perhaps forever nameless.

“The people who have lived in this community lived through slavery, Jim Crow laws and everything else that the African-American community has faced in the South,” said Glover. “What this cemetery represents is a tangible connection to that past but also gives people a way to connect to their kin.”

Waits’ great-great-great-grandmother, Eliza Waits, who was born into slavery around 1823 and died in 1870, is buried there.

He rattles off a list of people with blood ties to Flat Rock. There’s NFL Hall of Fame quarterback Warren Moon and comedian and actor Chris Tucker, the great-great grandson of T. A Bryant. Their family connection was explored by on the PBS series “African American Lives.”

Celebrity names, though, are not enough to keep Flat Rock Archives going.

What Waits needs is money.

He once had hopes of constructing a 30,000-square-foot building with a ballroom and research center dedicated to Flat Rock.

The reality is, “we need enough money to keep the lights on here,” he said. The archives operates on a $37,000 annual budget, funded in part by the Arabia Mountain Heritage Area Alliance. Waits, the sole staffer, receives about $300 a month and the rest is eaten up by utilities and maintenance, he said.

“We just had a water problem that cost us over $3,000, which wiped our budget clean.”

Attracting the attention of preservationists, donors and volunteers has been a challenge.

Jeanne Cyriaque, former African-American Programs coordinator for Georgia’s Historic Preservation Division for the Department of Natural Resources, said Flat Rock could benefit by being listed in the National Registration of Historic Places, but they need help completing the required documentation.

“The challenge is going to be how to carry their story to a broader audience and to develop a plan for long-term sustainability,” Cyriaque said. “For a house museum, that’s really going to take a lot more people involved, people who are professional fundraisers and curators. They also need a lot of heavy-duty programming, and right now they don’t have that capacity.”

There are some moves in that direction.

The archives, which opened in 2006, now has a website, where visitors can also make donations. And in 2015, the archives received an award for Excellence for Preservation Service from the Georgia Trust for Historic Preservation.

T. A. Bryant Jr. praised Waits for the work he’s doing. He and his sister donated the Bryant homestead for the archives. At the time the house was vacant and in disrepair.

“It hurt me to see the house go down like that,” he said.

If Waits has his way, the Flat Rock Archives will flourish so people like Warren Moon’s mother, Agnes “Patsy” Moon, who lives in Los Angeles and visits Flat Rock for reunions, will have a place to go to remember her family’s history