The thriving music scene, beauty pageants, stock car races and community events of the Lithonia Speedway and Country Club, located just north of historic downtown Lithonia, were intimately connected to the wealth and prosperity of one of America’s most historic Black neighborhoods: Sweet Auburn. In spite of segregation and disenfranchisement, Sweet Auburn was home to a thriving community of African-American businesses, places of worship, and civil rights organizations such as the SCLC and SNCC throughout much of the 1900s. That included the dental office of Dr. B. F. Anderson.

B. F. Anderson. Photo from the Atlanta Daily World.

Raised in Lithonia, B. F. Anderson was a dentist and landowner in Sweet Auburn whose country property included the Speedway and Country Club. The Lithonia Country Club had its grand opening in 1949, one year before Dr. Anderson’s death and the beauty pageants and races were already active by that time, drawing spectators to see the motorcycle and stock car competitions multiple times a year. After Anderson died, his estate (worth $750,000, adjusted for inflation) was split up. Ownership of the land including the Country Club and Speedway went to his brother and nephews, although a preexisting tenant named Otis Ealey likely continued to operate the Country Club until the mid-1960s. (In 1964, Ealey was arrested for “operating a lottery and possession of more than the amount of tax-paid whiskey,” according to the Atlanta Daily World; he likely ran the lottery out of the Country Club.) Anderson and his wife, Agnes, were both very much involved in the Big Bethel AME Church, and the country property – sometimes called “Anderson Lake” – played host to a variety of community events. That included camping and outdoor activities for boy scouts. 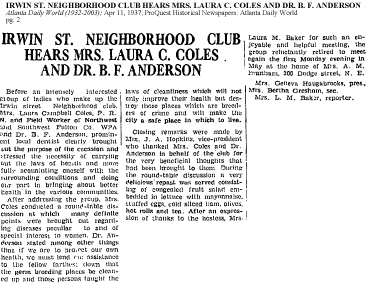 Article from the Atlanta Daily World describing a talk on health that Dr. Anderson gave to a neighborhood group in 1937.

B. F. and Agnes Anderson were well-traveled and well educated, part of Atlanta’s prosperous Black middle class. Both completed undergraduate studies at Morris Brown College (although it is unclear if that was at the same time). B. F. Anderson was the college classmate and lifelong friend of Charles Lincoln Harper, the first principal of the historic Booker T. Washington High School. Following undergraduate studies, Agnes Anderson attended the Manhattan Trade School of New York City, while B. F. received his dental degree (with honors) from Howard University in Washington, D. C., before returning to Atlanta to practice. As well as being a dentist, B. F. Anderson was a landowner, owning buildings across from the iconic Royal Peacock in the heart of Sweet Auburn. The couple lived in the then-prosperous middle-class neighborhood of Vine City. Their home at 371 Sunset Avenue was located less than a mile from the house where Martin Luther King, Jr. and Coretta Scott King moved with their family in 1965. Anderson was also known to travel each year to attend the World Series and spent time visiting New York City and Washington as well. 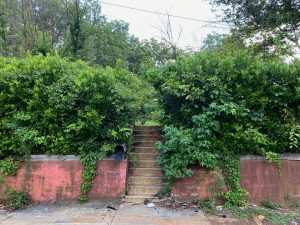 The site where the Andersons’ house stood in Vine City, on Sunset Avenue.

Although seemingly remote at the time, Lithonia was connected to Atlanta and vice versa through gathering places such as the Country Club and Speedway. People from across the region would attend concerts and races, which then also acted as an important gathering space for African-Americans in the segregated South. The rich tapestry of the Arabia Mountain National Heritage Area is intimately linked with the fates and fortunes of people across the broader Atlanta landscape.