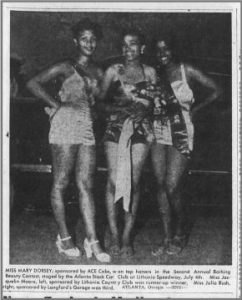 A photo from the Alabama Tribune (based out of Montgomery, AL) of the second annual 4th of July Bathing Beauty Contest at the Lithonia Speedway and Country Club, which took place in 1949.

At a dirt-floored dance hall far from the bustling streets of Atlanta, people raced, reveled and made merry. This place was the Lithonia Speedway and the accompanying Country Club, tucked into the rural expanse outside of downtown Lithonia. During the mid-1900’s, the Club and Speedway were a center of Black entertainment in the Atlanta area, featuring motorcycle and stock car races, music from people such as Little Richard and B. B. King, barbecue picnics and, every Fourth of July, a beauty pageant.

Beauty pageants at the Lithonia Country Club were a major event, bringing dozens of women to compete – “the pick of Atlanta and the vicinity,” as one newspaper article described them. These “bathing beauties” would compete with the sponsorship of various local businesses and organizations, including small restaurants and stores such as the Tillman Sandwich Shop and local barbershops. Some of the beauty pageants were charity events, with the proceeds going to community organizations, public health initiatives and even cancer research. 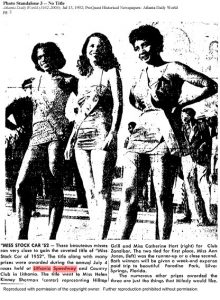 A 1952 photo in the Atlanta Daily World, one of the nation’s oldest Black newspapers, celebrated that year’s victors of the “Miss Stock Car” beauty contest.

The beauty pageant wasn’t the only thing going on during the Fourth of July Holiday, although it was a centerpiece of the events. The day was filled with motorcycle races, men’s and women’s stock car races, barbeque and live music. Buses provided safe transport from Atlanta to the Speedway, bringing people from out of the city to this normally-quiet corner of the Georgia Piedmont. The events weren’t just social gatherings: they also provided a space to forge connections within the Atlanta-area Black community and work to organize people for civil rights, including through voter registration. Although today this once-bustling community hub is no more, the cultural legacy of the Lithonia Country Club remains. It helped elevate the careers of now-iconic musicians, supported a thriving Black racing league, and, each Fourth of July, crowned one lucky “Miss Stock Car.”