On April 18th, 1972, Charles Davidson, Jr., the then-President of one of the largest granite products companies in the world, made a fateful decision: in order to prevent a massive mountain of granite owned by the Davidson family from being developed by one of the company’s competitors, that property would be donated to DeKalb County to be preserved forever as public greenspace. That 500-acre rock outcrop now constitutes a centerpiece of what has become the nationally significant 2,500+ acre Davidson-Arabia Mountain Nature Preserve, a focal point of the Arabia Mountain National Heritage Area. Today, the DeKalb County government and the Arabia Mountain Heritage Area Alliance recognize and honor that donation — and the Davidson family – for its enduring impact on conservation and recreation in metro Atlanta. There will be an in-person, public ceremony recognizing and celebrating the 50th anniversary of the making of the donation later this year, coinciding with the autumn wild daisy bloom on Arabia Mountain. This 50th anniversary year of the Davidson-Arabia Mountain Nature Preserve’s creation coincides with the 200th anniversary of DeKalb County.

“I don’t think you can overstate the significance of that 1972 donation,” said Arabia Alliance co-founder Kelly Jordan. “This area could have been completely different, and this incredible landscape could have been lost. The more than 2,000 acres of additional green space preservation that you see and enjoy today took years of efforts by DeKalb County, the Arabia Alliance, and members of the community, but the Davidson family’s landmark decision to donate Arabia Mountain to DeKalb County was the start of it all.”

Many decades before, Lithonia had become a major hub for the granite industry, with local quarries sending stone off to construct projects such as the U.S. Naval Academy in Annapolis and other monuments and buildings across America. Granite built the booming town of Lithonia – the name of which means “City of Stone” in Greek – and many of the buildings in the Lithonia National Register Historic District are made of local granite. In fact, DeKalb’s first Black public school building, the Bruce Street School, was granite-clad, with local stone stitched together to form the building’s exterior.

Enter the Davidson family, whose granite products business in Lithonia would eventually lead to the protection of one of the largest granite outcrops in metro Atlanta. In 1888, John Keay “Jack” Davidson immigrated from Aberdeen, Scotland, looking for work in the U.S. granite industry. He settled in Lithonia where in 1895 he began the Davidson Granite Company. Three of his five sons (Norton, Charles and Keay, Jr.) and two of his grandsons (Charles, Jr. and Everett) would go on to direct the company and its affiliates after Jack’s retirement in 1940.

The Davidson Granite Company grew into one of the largest diversified granite products companies in the world. However, by the early 1970’s, increasing competition and the impending retirement the last active family member (Charles, Jr.) led the family to reevaluate some of their assets, leading to the donation of Arabia Mountain and the establishment of the Davidson-Arabia Mountain Nature Preserve. In the words of Jack Davidson’s great grandson, Charles “Chip” Davidson III: “As a member of the third generation of Jack Davidson’s descendants and someone who was born and grew up in Dekalb County — and spent many happy days of my youth exploring Arabia Mountain with my Dad – I can’t adequately express how proud I have always been of the decision which my father and his family members made 50 years ago to ensure that Arabia Mountain will always be a special place for the public’s use, enjoyment and appreciation of the beauty of the world that God has created for all of us.”

“Our park staff is humbled and honored to be part of a destination that has had such a profound impact on so many lives and has helped patrons create vibrant memories,” said Chuck Ellis, the DeKalb County Director of Recreation, Parks and Cultural Affairs. “Walking the trails, visiting the nature center and especially standing at the top of the mountain overlooking the vastness of nature are truly remarkable.”

Geologically, Arabia Mountain is known as a “monadnock,” a protrusion of rock that has resisted erosion as the landscape has receded around it. Conditions on the monadnock are harsh and desert-like; in fact, you can see prickly pear cactus growing in the sandy depressions on top of the mountain. These depressions – called “solution pits” – are key to life on the rock outcrop and take thousands of years to form. Lichen grows on the rock outcrops and slowly releases faint amounts of acid. Along with the effects of rainwater, the lichen erodes patches of rock just enough to create a thin, sandy soil that today supports a variety of rare and endangered plant species, such as the iconic red diamorpha. As people hike on the granite outcrop today, it is important to Leave No Trace and walk on the bare rock, rather than in these puddles, pits and sandy patches.

“It’s truly an exciting and humbling time for us as we honor a great conservation success story,” said Davidson-Arabia Mountain Nature Preserve Manager Robby Astrove. “Join us on a hike, program, or volunteer day to celebrate our 50th anniversary and experience the result of visionary preservation and conservation.” 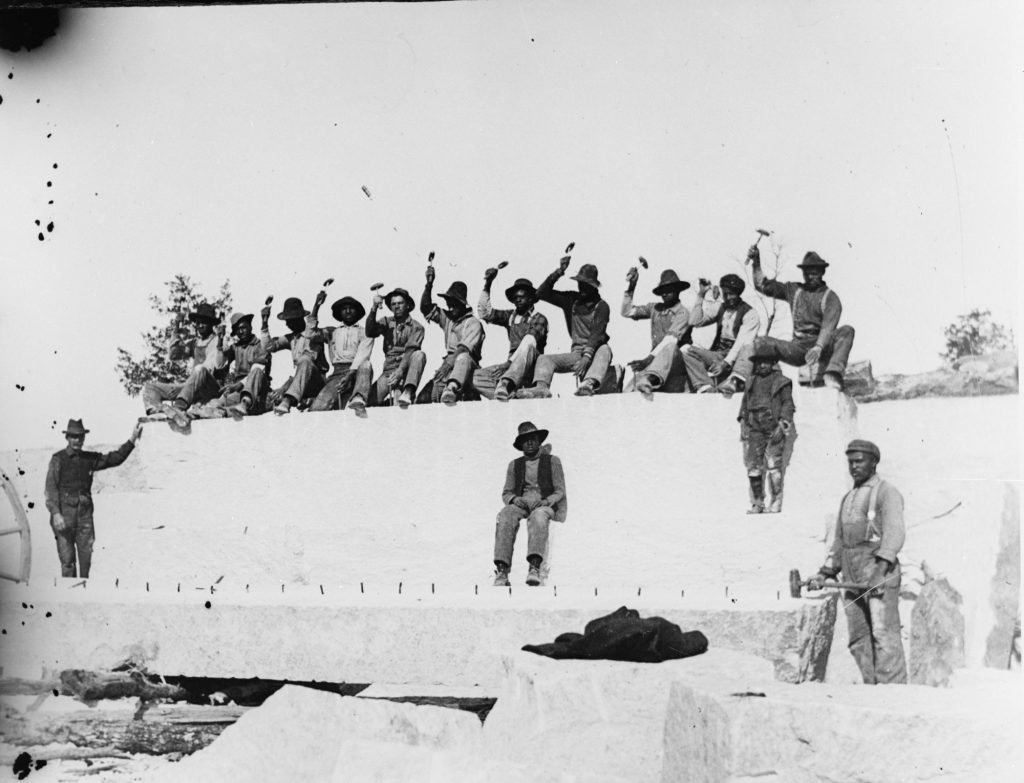 Granite quarry workers near Lithonia, Georgia between 1910 and 1920. Lithonia was a global hub for the granite industry during the 20th century. Credit: Georgia Archives.